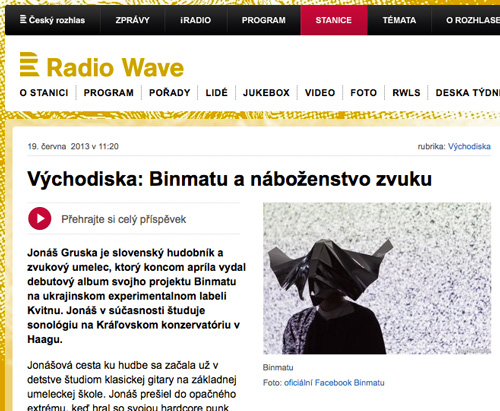 Jonáš Gruska is a Slovak musician and sound artist. As Binmatu he released his debut LP аt the end of April on the Ukrainian experimental label Kvitnu. Currently he is studying sonology at the Royal Conservatory at The Hague.

Jonáš’s life in music started in his childhood when he was studying classical guitar at the elementary art school in Bratislava. He then crossed into a oposite extreme when playing with his hardcore punk band Vintaer. It is after that when he took interest in experimental music and to search, according to him “for boundaries of what is possible to do and achieve with sound”.

According to Jonáš, Binmatu is a part of a broader view that considers sound to be a form of a sovereign phenomenon, which becomes the object of an almost religious experience.

Binmatu’s take on drone music is innovative in his way of dealing with psychoacoustic effects triggered by his slowly unraveling layers of frequencies experienced by the audiences of Bratislava’s NEXT Experimental music festival where Binmatu unleashed his mesmerizing live show to a full success.