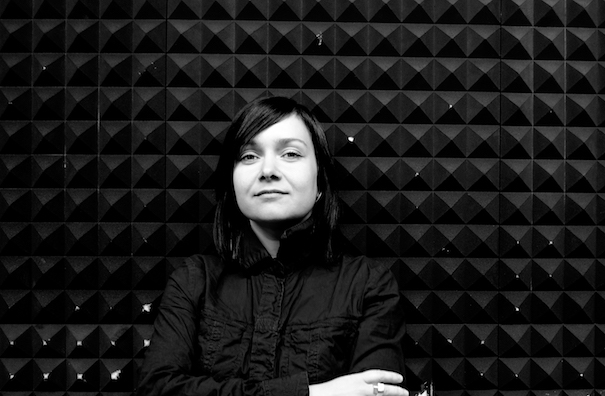 The EP Volya (Kvitnu 2014) is an exception in the work of Ukraine and now Vienna-based electronic experimentalist Kateryna Zavoloka. It is the only record so far in which she has used sampling material with a strong political connotation: field recordings from 2013 and 2014 Maidan winter revolutions in Kiev. Below is a background talk about the soundscape of the Maidan.
[Hannes Liechti]: What is your general understanding of sampling?
[Zavoloka]: Basically, sampling is recording. The term triggers two further dimensions: The first is making field recordings and processing them by using samplers. The second one would be recording instruments and different voices and preparing all these recordings as samples for my live set.

[HL]: How important are semiotics when it comes to sampling? Do you also use samples in order to express a certain message?
[ZV]: First of all, if I start to compose, I already have some concept in mind. I then choose the samples to work with. The samples I am going to choose completely depend on my theme.

[HL]: When did you decide to work on the topic of the Ukrainian revolution?
[ZV]: With the Volya EP the process was actually the other way round. I didn’t know at first time that I was going to produce an EP out of these sounds. We just more went to the revolution almost every night. Of course we were helping those people, bringing them food, and so on. But we were asking ourselves: what could we do as artists?

[HL]: You wanted to participate more actively.
[ZV]: It was such a strong atmosphere that I felt that I had to do something out of it. I really had to process it. But I didn’t want to play concerts for people. So I decided to record. I recorded everything, everything that was happening, every night.

[HL]: Can you describe the soundscape?
[ZV]: In the first two months there were just people gathering but then the real fighting with the police began. You could hear exploding fireworks and gas grenades. Furthermore, people started to take huge metal sticks and beat them onto burned busses. That sound was very strong, kind of march-like. Suddenly someone whistled and everything stopped and there was silence. Then someone screamed «Glory to Ukraine» and the people started to sing the Ukrainian anthem. The soundscape was kind of a symphony sometimes. You have to imagine yourself in the middle of this huge square: you hear these sounds all around yourself, constant but moving from one side to another. That was very impressive and strong.

[HL]: What kind of equipment did you take with you?
[ZV]: I only used a small zoom recorder. You cannot take huge equipment with you in that situation. You have to be able to run – if the police come.

[HL]: Did you already know which samples you were going to cut out of this massive footage?
[ZV]: I still did not have the intention to release something. It was more that anthropological kind of interest to do these recordings. I mean that was the most powerful event I ever attended in my life. It was just for me personally.

[HL]: When did you decide to work on these tracks then?
[ZV]: Some weeks later Russia started the war with Ukraine. That was the moment when I thought that I, as a Ukrainian, have to say something. I then simply called this EP «freedom» (English for Volya). In a way this was like a meditation for me, kind of my personal fight. Usually I never do this kind of political art.

[HL]: But that is political art.
[ZV]: Some could say yes. But for me, conceptually, it was more a ritual to protect the Ukraine. I just wanted freedom, I don’t want war with Russia. And these samples were fitting amazingly for my concept.

[HL]: Is there anything else beyond this message of freedom you want to transport with these tracks?
[ZV]: What is very important for me is that people get this powerful feeling that we had when taking part in these events.

[HL]: Do you think it is important to be physically at the place of the events if you use these kinds of sounds. Or it doesn’t matter?
[ZV]: For me it is very important. Of course you can take these sounds just from YouTube. But I really have goosebumps when listening to these sounds. Because I was there. I really know what it means.

[HL]: I think the war in the Ukraine was one of the first wars that could be followed on live streams at home, everywhere on the planet.
[ZV]: That’s true. And it was also the case on the Maidan square in Kiev. The police actually even shot at some of them, even those with «press» written on their helmets. But the content they recorded remained on the Internet because it was streamed.

[HL]: Did you also follow these streams when you were not on the square?
[ZV]: Yes we did. When we came home in the early mornings for catching some sleep, we used to open our laptops with all the streams from Maidan. We could only fall asleep when hearing the ongoing sound. Because when it stopped it meant that the police were coming and started to shoot. So for me these samples also represent the sound of when I could fall asleep these times.
Original here:
https://norient.com/blog/sampling-stories-vol-11-zavoloka/