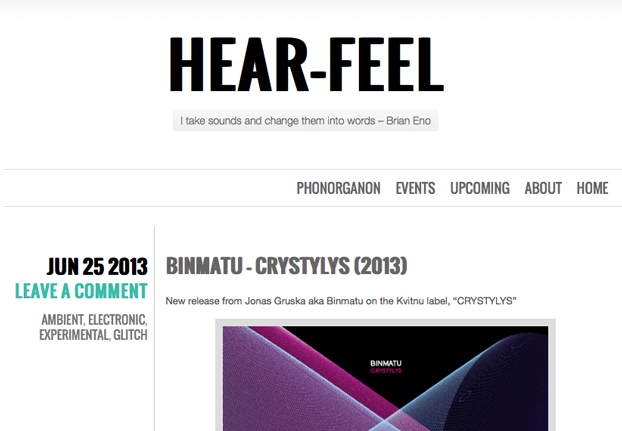 I can hear it now, the waves lapping through the open window. It’s 11pm but the nights are so light here that I can still see perfectly well outside, streetlight or no. Not that I need to see the waves to know they’re their, I can tell from their distinctive sounds, the sloshing and breaking of the crests on the rocks. Binmatu means with this release to alter our perception of sounds, to remind us that at their core they are nothing more than jitters in molecules, than perfectly predictable and well understood fluctations in air pressure from the object to our ears.

CRYSTYLYS is presented to us as 7 tracks each 4 minutes apiece, with no track names or other remarkable features to demarcate the differences between tracks other than the music itself. Already there is an air of mysticism hovering over the album, as well as something rather more clinical, and then the music starts. Much of the bio talks about how this album is supposed to be a psychedelic and transportative atmosphere and I can believe that as the first track opens to a collection of slowly repeating electronic verses, rising to a sustained, shimmering, oscillating crescendo of wobbly synths beneath whining, growling drones. It creates an illusion of progression whilst actually remaining completely stationary.

“II” continues that trend, carving a subtley different atmosphere from a fairly similar cloth; the underlying synth is deeper, darker, and the previously overwhelming foreground drone is dialled back, but that same clinical repetition remains, like some kind of ghostly, ethereal siren slowly rotating and foreshadowing some disaster in slow-motion. “III” hits absolute-zero in this succession, barely climbing above a sub-bass whisper, comprised of nothing more than a glacial bass drone layer and a thin, slowly cycling waif of piercing noise floating above the surface, like a star rising and falling in the infinite black of the night sky.

Binmatu is slowly paralysing us as we go along, slowly turning the speed and complexity down to craft these mesmerising soundscapes. “IV” is indescribable, an audio-visual paradox; it barely moves, switching slowly between two notes, yet the slight variability in the volume throughout as it imperceptibly climbs and falls is enough to keep it weirdly compelling. “V” is my favourite, mostly because it’s rather a curveball; composed of clicks and glitches rather than solid slabs of sound it marries two sets of slightly unsynchronised, slightly differing blips and charts their progress as they increase and decrease in velocity, always getting close but never quite touching (asymptotic). It’s at this point that I guess the album reminds me a lot of the sort of work Pixel creates, although rather more sparse and with less of a focus on rhythm and musical theory.

There’s a certain kind of palindromy occuring here as “VI” kicks the glitch of “V” into overdrive, no longer taking the slow and easygoing attitude and instead smearing the clicks together into an almost helicopter like sound as they rev up ready to take off and fly overhead. And at first glance closer “VII” breaks that palindromic concept, but if you listen closely you can just about make out the rattling and quivering in the notes, the glitch tumbling so fast that everything is blurred together into a near continuous single note. It’s clever really, highlighting the fact that drone, amongst other sounds, is nothing more than huge waveforms or lots pressed so closely together that the human ear cannot discern one distinctly from the next.

This isn’t music for the sake of music, it’s sound for the sake of music, carefully calculated and honed wavefunctions that breakdown the natural process that is the transmission of sound waves and our human perception of them and turn it into a scientific and analytical idea. It’s an album that keeps us in check and reminds us that what we call music has a rather subjective definition and that at the end of the day, it is still nothing more than an agglomeration of sounds and noises and that those are nothing more than the perfectly predictable and well understood fluctations in air pressure from the object to our ears.