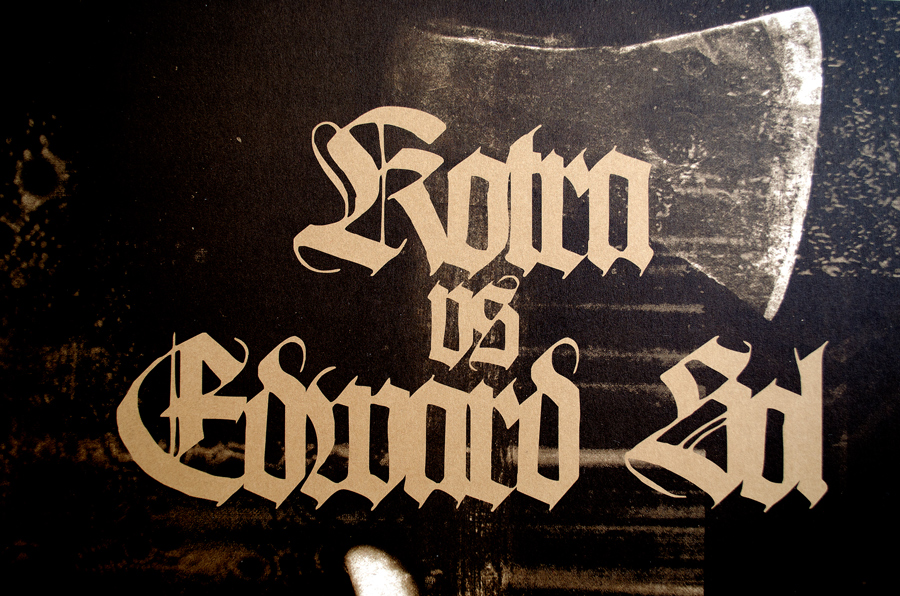 “The Sokyra (KVITNU 53) LP is a team-up between Kotra and Edward Sol, and a fine piece of snarly electronic blackened grunting it do be. Kotra is Dmytro Fedorenko who runs the Kvitnu label and has been releasing his own take on the “testing extremes” genre of industrial-tainted electronica for some years now, effectively trying out new forms of punishment for those who venture onto the dancefloor, only to find landmines under the linoleum planted by him…but it’s a discovery for me to hear Edward Sol in any shape or form, even if it is through one of these collaborative-remix type projects…
Sol (Edward Solomykin, also records as Edward S.) is likewise of the Ukrainian persuasion and is one of those many mavericks who made good through working with the low-quality equipment that was the only recourse available to an electronic musician in Russia for some time…he has a background in sound design for cinema and TV and indeed was trained professionally in that area at college in Kiev, and his soundtrack work for movies netted him more than one award for his cluttered mantelpiece. The Quasi Pop label was founded by him as a home for unusual music in 2001, and for many years now he’s been carving away his at his own furrow in the genres of noise, industrial, electro-acoustic and all-round experimental analogue bashery. If his solo work’s anything like what has ended up on the grooves of Sokyra, I would recommend immediate investigation. Just perfect for those for whom sullen, insistent, brooding and repetitive noise pummellings are the sort of thing that gets you out of bed in the morning.
The press notes here confirm something about the simplicity and directness of the Edward Sol set-up, referring to “cassette decks, tape loops old reel machines, Tascam 4-Track plus a couple of vintage analog synths and sampler”. But clearly not one to make a fetish out of owning “cool” equipment, this shopping list of Sol’s reflects the CCCP situation alluded to above (many musicians, Alexei Borisov among them, driven to this sort of instrumentation from necessity). What comes across to me is not the sound of the equipment, but the clarity of ideas and the directness of the execution…noises growling out in a raw and untreated fashion, instead of being processed and reprocessed through a zillion filters and layers of digital manicuring. But so far I seem to be overlooking Kotra’s role in all this. The printed credit reads “music composed by Kotra from original sound material created by Edward Sol”. But it doesn’t sound quite like any Kotra record we’ve ever heard…it’s darker, meaner, and more insistent with its constant pulsations, its remorseless forward motion, its refusal of user-friendly variations. Dmytro Fedorenko has created a very successful reorganisation of Sol’s stern music and produced something perhaps entirely new from the process.
He’s clearly the right man for the job, respecting and honouring the other composer’s intentions, not simply knocking out a bland “remix” heap of mushola. The aggression and sheer iron in all these short pieces (whole LP is around 12-13 mins a side) is reflected in the tracks titles, which translate as ‘First Axe’, ‘Second Axe’, and so on. Facing the music is indeed like facing such a blade, a slow-motion carving away of your supple flesh and muscle by a weapon hungry for human blood…Bandcamp page for this growler concocts an entire mini-fiction around this grisly theme, describing the release as “A short story of two gentlemen travelling in a car to a riot streets with a trunk full of explosives, gas masks and other special goods”. Great! From 14 December 2017.”
http://www.thesoundprojector.com/2018/09/22/the-blade-of-woe/